We made it to Tokyo in one piece and our first day has been great! It's been a long one, so I'm not promising the best blog entry ever written, but I'll do my best to recap.

We woke up at 5am to get in a run before leaving for the airport. After hitting a snag in our homebuying process last night, packing was a bit of a whirlwind, but we threw what we could in some suitcases, cleaned out the fridge, double-checked our passports, and locked the door behind us. (After unpacking tonight, I realized that I missed the pile of running shorts that I laid out, which made me angry at myself for a few minutes before I got a grip and realized that if that's the worst thing that happened, we're all good! I've always wanted to buy something at Uniqlo anyway, after all those retail case studies!).

We boarded the flight and were lucky enough to be sitting in business class (consulting miles paying off yet again!). It's worth noting with the upcoming pictures that we are obviously NOT running a fashion blog here

. (And we're not running a healthy living blog, yet, although hopefully I will in the future!) 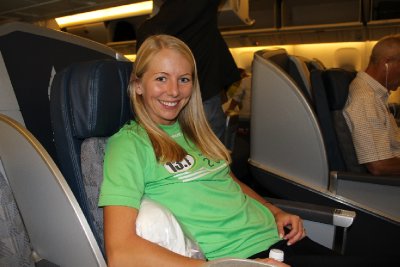 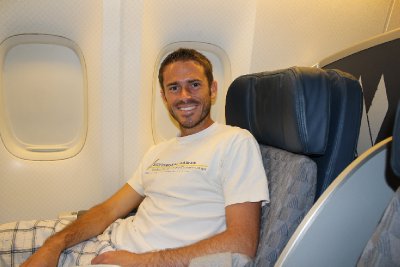 The 13-hour flight passed relatively uneventfully. We were quickly served lunch (salad for both, chicken with purple potatoes and vegetables for Kev, shrimp and scallops with ratatouille for me - I know, who orders seafood on a plane? But it wasn't bad!, chocolate ice cream for Kevin, and a pretty measly fruit plate for me, which I supplemented with some strawberries from home that I just couldn't throw away - thanks, Mom!). Kev tried some wine to make him go to sleep (which didn't work so well). Neither of us slept for more than an hour the entire time, but we were definitely relaxing - reading for me, watching The O.C. (I should say that's for me to prevent Kev the embarrassment of liking teenage girl shows, but ...), doing a little bit of health coaching coursework, and generally entertaining ourselves as best as possible for 13 hours. 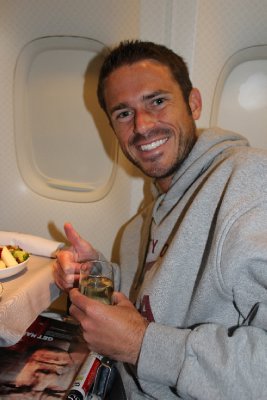 Before landing, we got another meal - Kev got pizza, which had mushrooms so he just ate the crust, and I just went for the side salad, along with my tofu and spinach wrap from home (that, yes, had been unrefrigerated for 14 hours by this time, oops). 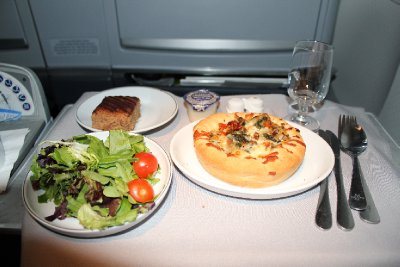 When we got off the plane, I was so excited to take a picture of the "Welcome to Japan!" sign, and I happily snapped away for 2 seconds before a security guard frantically ran across the room, screaming (Japanese) in my face and waving his arms. "NO PICTURE!!" he finally said - oops again. 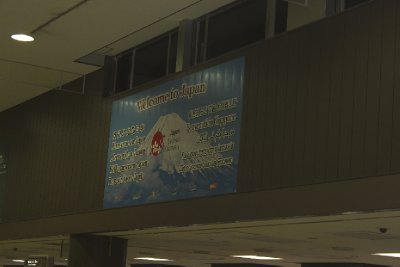 Miraculously, the bus I had planned to take left at exactly the time we expected, and took us right to our hotel (in Shinjuku, the central area of a Tokyo, about a 50-minute ride from the airport). The bus employees had to bow to the bus every time we left a station, just one of many examples of how polite they are here. The ride was pretty fun, and it was great to see so much of Tokyo so quickly. We were amazed at how dense it is - every building is thiiiis close to the one next to it, and there are people ALL over! We were also surprised that the river system is so interspersed into the city, and how clean and well-maintained the city is! 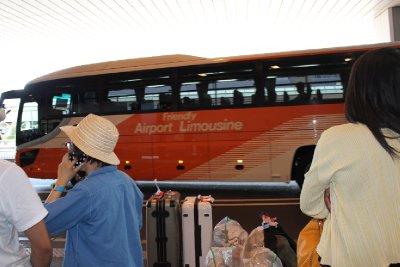 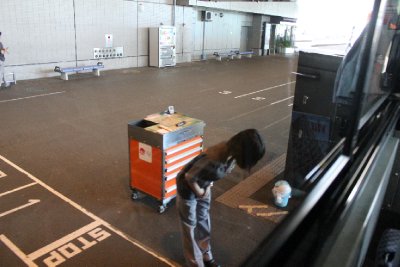 Our hotel room is on the 29th floor overlooking the city. Here are just a few of the great views! 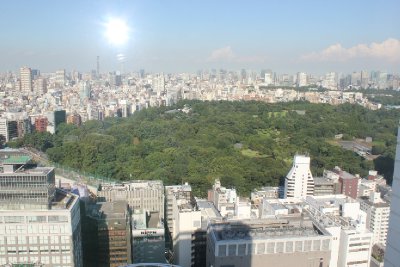 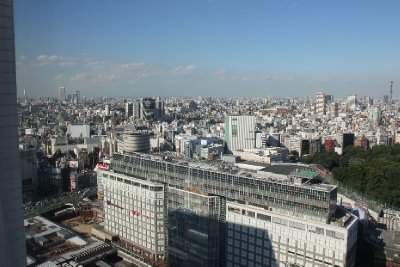 We made the mistake of trying for a 45-minute nap as we were pretty exhausted by this point ... but neither of us could sleep for the first 20, and then we crashed hard for the last 25, making it hard to get up. We made it though, and spent the evening exploring Shinjuku. There is SO much to look at, and people milling all over the place. The convenience stores are especially overwhelming - there are signs, colors, and products in every inch of the place, and yet people march right on in and pick out what they need just as I would at a CVS. On a related note, I certainly don't mean to be insensitive, but we were actually surprised how homogenous Tokyo is - we expected more of a melting pot like New York City, but we very clearly stood out, and saw only a small handful of non-Asians the entire evening. 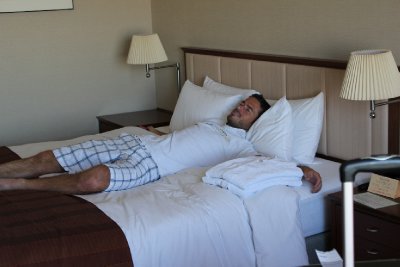 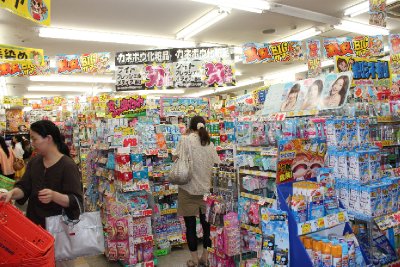 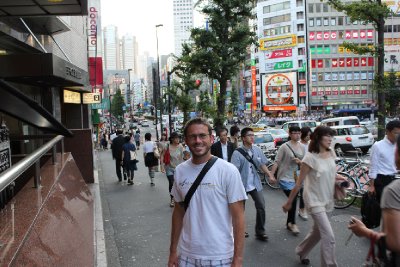 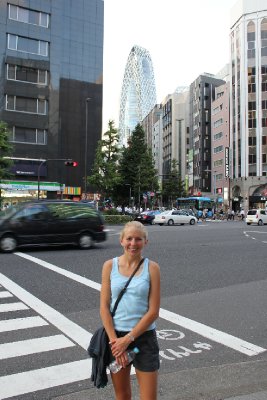 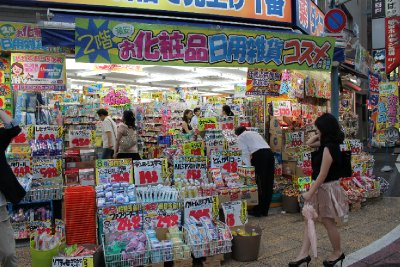 After walking up and down several streets, we decided to look for a place to eat. We thought sushi would be a logical option, and tried to look at menus ... but realized that there was very little English, and very few pictures. I had read about "conveyor belt sushi," and was dying to try the experience, so when we came across a place that said "Sushi Go-Round Restaurant," we jumped. What a great choice! The restaurant was small and probably sat 15-20 people around a large station where the chefs prepared sushi and put it directly on a rotating conveyor belt. Each plate was labeled with a price, so you could look at the sushi as it passed and grab what you wanted. Everyone there was a local who clearly knew what they were doing, so we had to ask for a bit of help from the waitstaff (e.g. how to make the green tea using powder and a personal hot water spout at your place at the bar). We had some great tuna rolls, excellent tuna nigiri, and also got a bit adventurous. I tried the cuttlefish (we did get a "menu" about halfway through, although only some of the items were on the menu), and the texture was far too much for me to handle. I also tried clam miso soup! I made myself suck down 2 clams (for bravery points!) before just drinking the soup (which the waitress informed me was done straight from the bowl after I made a sign indicating that I'd like a spoon - oops one more time!) It was a great first meal in Tokyo and we already got to check something off our bucket list! 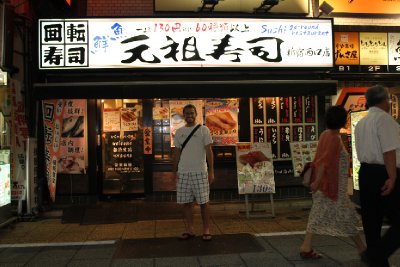 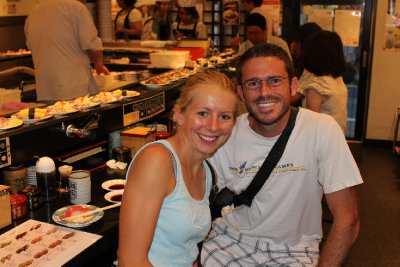 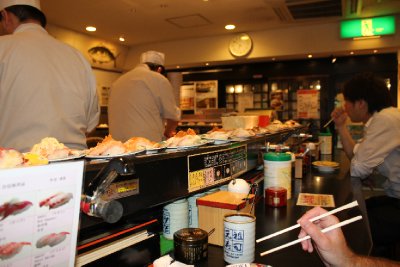 We explored for a bit longer before returning to our hotel (to great views!). We are going to crash hard tonight, and hopefully get in a solid 8 hours of sleep before the full day that we have planned for tomorrow! 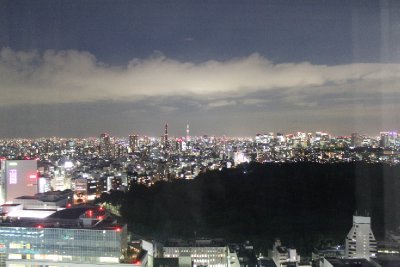 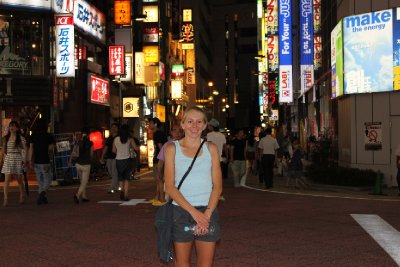 Stay tuned for some excitement, and thanks for following!!
-Megan and Kevin

Welcome to our new travel blog! After having so much fun with our honeymoon blog, we've decided to try this out again. Just like last time, no promises that we'll be able to update every day, but we'll have Rover (our camera) in tow and we'll do our best to document our adventures.

As for right now, we're 10 days from departure, but we're really just starting to focus on the trip and plan our activities. Between finishing up business school, having 8 out-of-town visitors for graduation, moving from Chicago to Dallas, buying a place in Dallas and dealing with mortgages, etc., looking for cars, getting settled in to Dallas, and vacationing in Colorado with both of our parents, we've been in a whirlwind of excitement and just haven't had a chance. Plans are shaping up, though, and they look great! We'll keep you posted ...